Home / Members / In Memory Of / Lynne 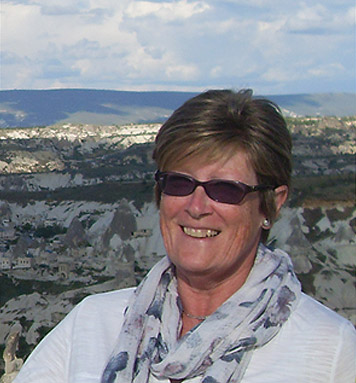 It is difficult to know where to start this story but here goes. My husband retired from work in 2003 due to health problems. I was working full time as a teacher in a primary school and enjoying myself. Money was tighter with one income but life was reasonably good. Over the years however, my husband started to suffer from depression and his health became poorer. At the end of 2010, I made the decision to change my work hours in 2011 to part time, three days a week, in order to spend more time with my husband. I hoped that the extra company would raise his spirits.

Over that Christmas, my husband had problems with his health and I eventually dragged him to the doctor in early January 2011. He was sent for tests at Logan Hospital who diagnosed terminal cancer. This was a shock to everyone. My husband died five weeks later.

This was a difficult time and I had all the things to do that need to be done when someone dies. I also have two adult daughters and was trying to be a support for them. I went back to work and started trying to get into a new routine for life without Reg. I had never lived on my own before as I met him when I was 17. It was a strange time!

About six weeks after his funeral, I went to the doctor because I had pains in my chest. I had my heart checked, had x-rays taken and was finally sent for an ultra sound of my chest. They detected a lump and sent me for a biopsy that afternoon. I knew that was not good news. The next day the GP confirmed that I had breast cancer.

The GP phoned the Mater Hospital to organize the next step. The Mater phoned two days later with an appointment with a surgeon the following week. My eldest daughter came with me to that meeting. He examined me and then ordered lots of tests, CT scan, bone scan, MRI, mammogram and x-rays. I was to come back the following week when they had all the results.

The following week both my daughters came with me to hear what was going to happen. The surgeon said that it was not a surgical case as the tumour had already grown into the chest wall and that I had secondaries in my spine, hip and femur. He introduced me to an oncologist.

The oncologist started me on a six-month regime of chemotherapy using Abraxane. I was also given a bone strengthening drip once a month. I was lucky with the chemo and did not have any nausea. I did lose all my hair however and I got tired towards the end of the treatment. My cancer marker came down into the normal range and I started on Arimidex.

I was very lucky at this time. I had worked for the Department of Education for over thirty years. I had lots of sick leave. Because I had signed a contract for working three days a week, my sick leave was paid at that rate which meant it lasted for most of the year. I took the rest of the year of work on long service leave. At the end of the school year I decided to retire. I was able to access my Super as I was over 55 and organized a pension to be paid monthly.

After a rocky start, my cancer journey became reasonably smooth sailing. I took my Arimidex every day and calcium, vitamin D and omega 3 tablets. I had blood tests every month and was given a bone strengthening injection once a month. My CT and bone scans showed that everything was stable and under control. I took this period of health in 2012 to travel to South America. I had always wanted to see Macchu Pichu. It was a wonderful tour and I decided that I would travel to as many places as I could while I was fit.

My good health continued throughout 2012. In 2013. I spent almost a month touring Turkey which was wonderful. I came back and painted the outside of my house. During this time I had some pain in my chest, and I felt that the tumour had grown. CT scans quickly confirmed that and I had to have fifteen doses of radiation to help shrink it. The radiation was annoying because you had to go to the hospital every day. Ruined your regular life routine but was not painful. My blood tests showed that my cancer markers in my blood tests had risen but were still within normal levels and I felt great, so life continued on.

In 2014, almost three years after diagnosis a scan has shown that one small tumour in my right lung has appeared but that all my bones are still stable. My hormone treatment was changed to Aromasin to see if that would stop any further progress. I was still feeling great, only had a few aches and pains but nothing worth worrying about. My cancer markers had risen again so I could see that another dose of chemotherapy was going to appear in my future again. But not until after my trip to Morocco and France!

I came back from six weeks travelling through Morocco and France in July, 2014 and was sent for scans. The results were not good. I had several new lesions in my liver! I was started on chemotherapy again, another six months on Abraxane.

My youngest daughter suggested that I see a nutritionist, which I did. She recommended green smoothies every day among other things. This seemed to help with my energy levels. Although I got more tired this time around, I did manage to keep to a reasonably normal routine.

In January 2015, with 18 sessions of chemo completed, my latest scans showed a slight reduction in my liver mets and that my bones were still stable. No lesions in my lungs were noticed. Since I have had progression on Arimidex and Aromasin, I was started on Faslodex. These are another form of hormone treatment given by injection once a month.

I had a few side effects with Faslodex, pain at the injection site for a day or two, weight gain and it made me feel low, and emotional for the first week of treatment. Life continues however and I spent a week in Singapore with my eldest daughter and her husband. During this time my cancer markers started to rise and after five months the Faslodex was stopped. It obviously was not working for me.

I was then put on Aromasin, and Afinitor in the hope that this combination would work at controlling the cancer for a while longer. I went to the Festival of Voices with some other members of my choir in July. I had a wonderful time but caught a terrible cold that I had trouble recovering from. I was worried about my health, as I had never felt this bad for years, and I had a holiday booked for Greece coming up soon. I decided to stop my treatment to see if that would help, and it did. I started recovering quite quickly. I went on my holiday, felt good and started the tablets again on my return. Unfortunately scans in December showed that I had severe pneumonitis, a side effect of the Afinitor, and progression in my liver and bones. 2015 was not a good year!

I was put on Xeloda, an oral chemotherapy immediately. My cancer markers started going down and scans show some decrease in volume in my liver mets. Side effects for me, were minimal, mainly tiredness and weepy eyes.

I celebrated my 5 year cancerversary and my 60th birthday in 2016. When I was first given this diagnosis, I was not sure whether either would occur. The statistics are scary. Yet apart from time spent on treatments, and going for scans etc., life has been relatively normal, and good. In June of 2016, I went on a holiday travelling through China and Russia for a month. Another interesting holiday!

Scans in December 2016, showed that Xeloda had cleared all mets in my liver but there was significant progression in my bones. Xeloda was stopped and I was put on Tamoxifen. Cancer markers started rising and scans in March showed more progression in my bones and lymph nodes, but that my liver and lungs were clear. I was put on Eribulin in March 2017. Latest scans in June show that my bones have stabilized and my liver and lungs are still clear which means this treatment is working just now. Only side effects are tiredness and loss of appetite, and a few more aches in my bones and joints. I am touring South Africa in August/September. What happens after that I do not know?

While we cannot endorse any company, some of our women have commented on how good these turbans look, and how comfortable they are to wear.