What Happens When Someone Dies?

Home / The Group / What Happens When Someone Dies?

Generally our society finds it difficult to deal with death, which can be isolating for those who are facing the end of their lives.

As well as helping women to live their lives in the face of this illness, this group is a space where women can talk about death and loss, and how to deal with the inexorable nature of the disease.

A question we are often asked is “How does the group deal with the death of a group member?”

Women from the group do die.  The death of a woman who has been a group member is always sad and upsetting.  Strong friendships are forged in the group, so it is not only confronting to the other women in the group, but it is also the loss of someone who has become important.

But as well as that, women feel that “sharing the end stage of another woman’s life has been a privilege.”  Most women feel “it is a part of the journey we all wonder and worry about.  Seeing other women deal with it gives you the inspiration that when your time comes you will be able to cope too.” 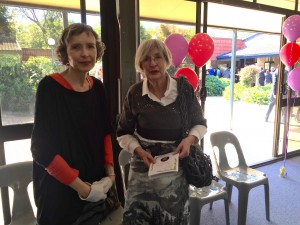 Women do say that attending the funeral of a woman who has died is very comforting.   Many women have said they feel better able to cope with the sadness if they attend the funeral.

Don’t feel you have to put up with pain. Tell your doctor. Ask for advice as to how best to use pain medication.