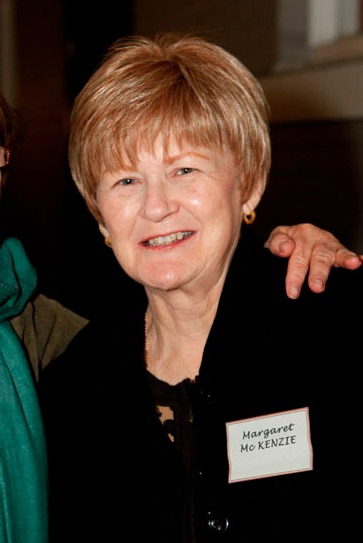 My journey with breast cancer – About 6 weeks after my 50th birthday in 1993, I discovered an indentation in my left breast. Even though my GP assured me there was nothing wrong I decided to go ahead the next week and have a mammogram.

The shocking news that I had breast cancer became my worst nightmare. I had a mastectomy and lymph node clearance. There was spread to 7/18 lymph glands. This was followed by 6 treatments of chemo with 5 weeks of radiotherapy in between. I was also put on Tamoxifen.

Diagnosis of Secondaries
Ten years passed with the usual blood tests, scans and sweaty palms when the time for review came along. I said goodbye to my Oncologist at the beginning of 2003 believing (hoping) that I had beaten this disease. I was off Tamoxifen after being on it for 8 years. Later in that year I began to suffer pain in my back which radiated down my leg. I had a lot of physio but it eventually got worse and I then had scans. Unfortunately the cancer had returned and I was quickly hospitalized and an operation ensured a few days later where 3 vertebrae were fused together and some bars and screws inserted. This was followed by radiotherapy.All went well until late 2009 when a scan revealed spread higher up in my spine and mets in my liver. It also showed an abnormal uterus which was thought to be endometrial cancer and so a hysterectomy followed in Feb 2010. No cancer was found. But by this time my tumor marker levels had risen and it was time to start chemo.

In June 2010 I started chemo but had some pretty awful side-effects and had a break for a couple of months. I then started Abraxane and after 5 treatments all levels were within normal range so the chemo was stopped.

Most of my working life has been as a receptionist/secretary with GP’s and specialists. I loved the work. I retired in 2005. I enjoy quilting, patchwork, reading and watching movies and visiting with friends. Life is difficult at times when on chemo and when I have a break, try to get back to my usual pursuits.

I have been married for 47 years and am lucky to have a very supportive and helpful husband. We have 3 children and 7 grandchildren. Our daughter is 43 and has 3 children; our son who is 41, has recently remarried and has one son. His new wife has a son and daughter. Both lost their spouses in very sad circumstances. Our other son is 37, married and has a daughter from a previous relationship. We are a close knit family and are all very precious to me.

Juices with fresh ginger may help with nausea.