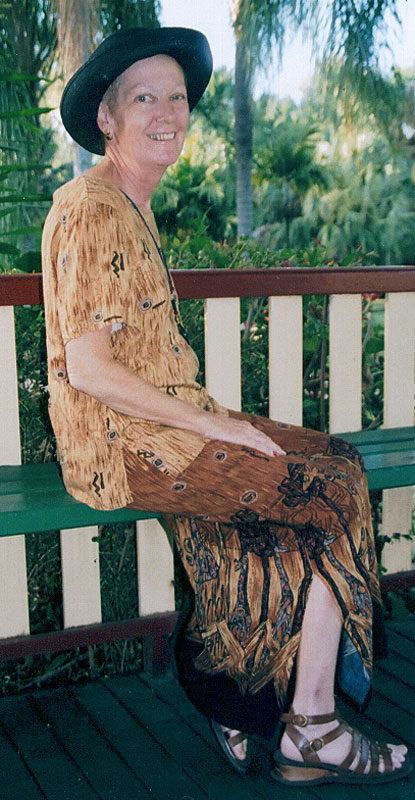 “What happens to you does not matter. What you become through those experiences is all that is significant. This is the true meaning of life.”
A quote that Lorraine came to believe in and and which was read at her funeral.

In 1996 I found a lump in my left breast. Tests were done then, and all came back clear. 10 months later I found a second lump. Tests showed that the first lump had turned malignant, and the second one was as well. I had the lumps and lymph nodes removed, and I had chemo and radiation. I had mammograms and scans done every year since then, and had no problems.

In 2003 I had a very sore back. I had Bowen Therapy, but the pain was becoming worse, and the therapist suggested I have an Xray, which showed tumours in the spine. Further tests revealed other tumours in the bones. In 2005 a mammogram and scan showed a return of cancer to the ducts in the left breast. In 2005, on Melbourne Cup day, I noticed swelling in my left arm and hand, and now have a sleeve and glove to wear. I am still receiving one or another type of treatment.

I studied teaching, and worked until my eldest child was born, when I stopped teaching, as I wanted to stay home. I breastfed our children for 15 years. The myth of breastfeed = no breast cancer flew with the wind for me.

When my youngest child was one I went back as a relief teacher. I do not do a lot of relief teaching now. I believe that now when I mention, “No, not today thanks because I am having this or that treatment,” the school secretary tends not to ring again for a number of days.

I do weekly meditation, and attend a weekly discussion group where most people have some form of cancer. They are great groups. I also attend a Know Your Bible group. I enjoy crochet, and have made tablecloths for several family members.

I have 2 older brothers and a younger sister. I met my husband in 1980 when I was playing hockey and he was in the army. He returned to Townsville after his discharge, and we were married in 1982. We have 5 children, 3 girls and 2 boys, and 2 grandchildren. Three of our children are still living at home, and one lives in Newcastle with her children. One child is in the army, and the other is studying teaching.