Home / Members / In Memory Of / Carol 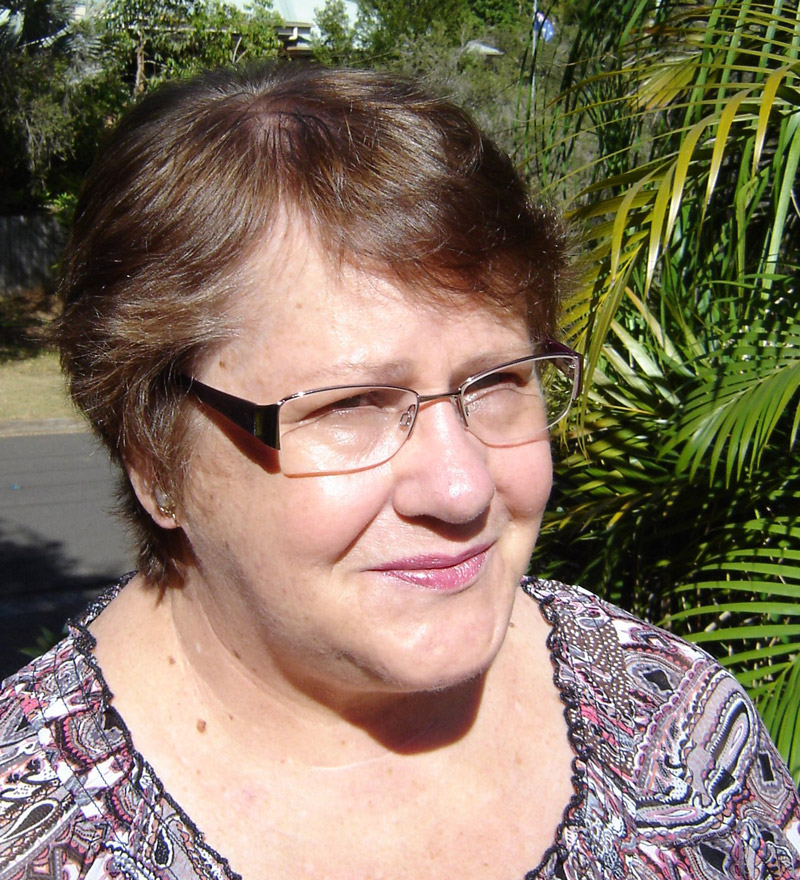 2010 was a big year for me. Our troubles began at Easter time, when my beautiful 28 year old daughter-in-law Kate became desperately ill and had emergency surgery to remove a 6 cm brain tumour. It was malignant and only 95% of it was able to be removed. It resulted in loss of vision and hearing in her left side and left her with almost daily seizures..

We were living in Rockhampton at the time and I had to return home for some scheduled surgery.
I had started out the year with a few body bits that needed to be sorted , nothing urgent, but the screws had to come out of my foot and a big gynae operation was required. After a standard recovery time I was able to return to work as a Registered Nurse at the Rockhampton Base Hospital.

I functioned OK , but felt I had “lost my oomph”, and blood tests and other investigations determined I had a tumour on my parathyroid gland. Although nearly always benign, these little tumours play a lot of havoc in the body ( the tiny parathyroid gland is responsible for regulating calcium in the body – if haywire, it takes calcium from the bones and throws it into the blood, causing all sorts of problems. These are characterised by “bones, stones, moans and groans”).

In the meantime, I was still able to work, but one afternoon as I arrived home from an afternoon shift, I swung my legs out of the car, only to have my left knee lock up. It took nearly an hour before I could get it to straighten and make my way up the stairs to the house. It kept locking up on me throughout the night, causing terrible pain. It settled down after a few days, but the long shot was I needed surgery to have it cleaned out. This was scheduled for early October.

I had to head down to Brisbane in September for surgery to remove the parathyroid adenoma.
It was a long and complicated operation, in which the surgeon also found 3 cancerous tumours in my thyroid gland. One was attached to the trachea.
This was a great shock to me as I was unaware of any problems with my thyroid gland, but my recovery was fine. The tumours were all completely removed, but further treatment was needed to destroy any remaining cancerous cells. The treatment for this cancer is radioactive iodine, which is swallowed in capsule form. It naturally makes the whole body radioactive, so requires complete isolation for at least 4 days. This was scheduled for November.

The knee surgery was done in October, and proved quite painful, and also predicted that I would need a knee replacement within 12 months.

So November saw me travel down to Brisbane again, and admitted to the Royal Brisbane Hospital.
Pill swallowed, I spent 5 days in the isolation unit, but didn’t glow in the dark! After the Geiger Counter proved I was safe to be near, I was able to fly home to Rocky.

Unfortunately the day before heading down to Brisbane, I found a lump in my breast. The registrar in the RBH looked at it on my admission, but because of the treatment and necessary isolation, was not able to do anything about it, so when I was no longer toxic I had to have ultrasounds and biopsies. It proved to be early invasive breast cancer, and of course had to come out.

A new bunch of Specialists now entered the picture, with a lumpectomy and axillary clearance performed in the last week of November. Then it was on to scans, oncologists and on and on.

December saw 2 more surgeries, one in Brisbane to insert a portacath: to facilitate chemotherapy, and another urgent but minor gynae operation done in Rockhampton.

The breast cancer proved to be Triple Negative, which means it has no receptors for hormones or Herceptin. Although the lymph glands were clear, this type of cancer is usually more aggressive and likely to return within the first three years.
I began 6 rounds of chemotherapy in mid January, finishing it bald, bloated and blotchy, in May.
Radiation treatment came next – 30 rounds over six weeks. I had to travel to Brisbane for this, so was away from home. My husband, Geoff was able to stay with me for the first and last sessions.

While having the radiotherapy, I spent the weekends with my son and daughter-in-law, looking at houses on the Sunshine Coast. We had moved to Rocky for my husband’s work, and I had agreed to go for a few years, conditional on us settling on the Sunny Coast at the end of that time (we have 2 sons living here.) So radiation finished in July, and in August we relocated to Palmwoods.

The post treatment fatigue lingered, but kept busy settling into a new location.
Things pottered along nicely until May 2012 when a routine cholesterol and liver function test showed deranged readings. Ultrasounds and scans followed, and proved I had multiple tumours in my liver, the lymph nodes around the heart, the back of the lung, and some suspicious spots on bones. Signs pointed it to be a spread of the thyroid cancer, but a biopsy of the liver and lymph nodes proved it to be advanced breast cancer.
It was quite a shock as I looked so well and apart from the fatigue, felt well.
So here we are, back at 3 weekly visits to the oncologist, and taking some oral chemotherapy tablets in an effort to contain the growth of the tumours.

My lovely family have been a wonderful support – my sons (Dan, Rick and Phil) have brought 3 beautiful girls into the family (Brooke, Kim and Kate) and we delight in our first little grandbaby, Jesse. We are blessed!
Although my time here may be limited, I have determined to enjoy and be grateful for every day.